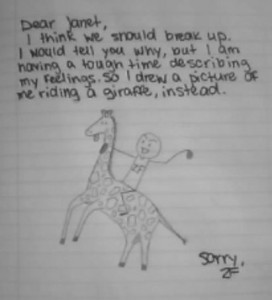 I had a friend.

I met her when we lived in Aspen. She was the reason I moved to Seattle from Aspen (she was from Seattle) which set me on a new and wonderful path in the Northwest.

But she had a crazy boyfriend who made her nuts. We lived thousands of miles apart and yet, I spent countless hours on the phone with her over the years riding the lows and highs; and the break-ups and reunions with this guy.

One day she called me to tell me they were getting married. He was sitting there next to her. Any good girlfriend would have been ecstatic – a happy ending! – but I couldn’t believe my ears.

I knew I was done. I was going to have to break up with my girlfriend. It might sound cold and heartless, but here is the deal:

This story isn’t about this particular friend. I haven’t spoken to her since that conversation. I don’t know where she is at this time. I don’t even know if she got married, or still is married. Our paths diverged, never to re-join and we’re both OK with that.

This story is about surrounding ourselves with the right people. We can have thousands if not tens of thousands of connections on social networks, but as busy professionals and/or business owners, we each have a very finite number of deep relationships we are able to truly handle at any given time in our lives. Those relationships should be making us the best person we can be.

This doesn’t mean we approach every friendship with a “what’s in it for me?” philosophy. I know it sounds that way. Giving in friendships equals receiving. I love being a good friend and being there on the other end of the phone to help my heartbroken friend. I love the sense of being needed and making a difference. There is no such thing as altruism. We always get something out of it.

But certain friendships have a lifecycle while others are meant to be with you throughout life. Some friendships require a great deal of work, others are the kind where you can call them for the first time in a year and pick up where you left off.

How To Tell If You Should Break Up With Your Friend

Maybe they are threatened by you or feel envious. I don’t know. I’ll leave that to the psychologists. What I do know is these friends make you feel you aren’t capable; you aren’t good enough. And that doesn’t serve you. Dump them. On the other hand, those who give you the smack in the face and tell you what you could be doing better? Those are the keepers.

If you can rely on anyone, it should be your close friends, right? I try to keep my expectations low so I don’t get disappointed. You know, I have a hard enough time keeping all my commitments so I understand when life gets in the way. But when you get to the point where you are in the planning stage with a friend and you just want to say, “shall we skip to the part where you back out of this altogether?” you know. It’s time. Dump them.

The Right Friends Make You Better.

When I first moved to Aspen, I hung out with a group of people who were better skiers than I. I’ll tell you what: I quickly became a much better skier. I’ve always had a habit of hanging out with people smarter than I, faster than I, and better than I. It not only makes me work harder, but it pushes me to reach greater potential.

This post is not about you. Do not even think that. This is about the liberation of pruning the junk out of your life.

I remember, as if it were yesterday (it was 1997), the day my live-in boyfriend who I had finally broken up with walked out the door of our apartment for the final time. We broke up amicably, and I only have fond memories of our time, but the moment he disappeared from my view, I had this extreme mixture of grief and weightless liberation. So much so, that I fell to my knees in the middle of the kitchen. I have never cried so hard and laughed so hard at precisely the same time.

It’s not easy because many of us have an innate desire to be liked. Of course. But it’s the best thing you can do for yourself. When you extricate the negative forces in your life, it allows you to focus on and make room for what is right. It propels you towards what you hope to achieve. Surround yourself with those whom you respect, admire. Have those friends who boost you up while being completely honest with you.

And you will become unstoppable.

Thanks to Smaggle for the image where she wrote about how to break up with friends.