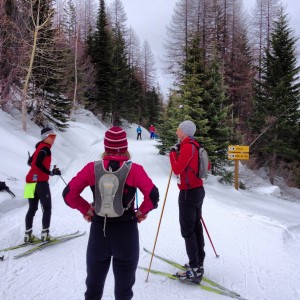 The starting line adrenaline/jitters were coursing through my body, and I was excited to be racing again.

I was entered for the 15K and we were lined up for the Schweitzer Nordic Extreme Race. My friend Alex gave my skate skis the wax love and I had my breakfast of soft boiled eggs on sweet potato hash, one cup of coffee, lots of water, and it was 10:30 – my ideal workout time.

The sun was out – it was the perfect temperature (in the mid 20s F). All systems were go.

Three, two, one, and we’re off. Jockeying for position and pushing furiously.

And about 30 seconds into it I started wondering when it would end. Why again, did I sign up to do this?

Seriously? I have to hurry now. And I have people on my butt who I DO NOT WANT TO PASS ME, and people ahead of me whom I really want to pass. I was so focused on my competition, I wasn’t paying attention to my own performance.

Hmmm, this isn’t as fun as it was supposed to be.

Since I still had about, oh… 14.75 kilometers to go, I launched into my self-talk. I had to something if I was already having those thoughts.

That’s when I realized this race started way before this morning and it doesn’t end today. Stop racing and pay attention to your own performance, and have fun.

I know the route well because it’s on my home turf. About 15 minutes in, I came to a flat in between two climbs. It’s a good time to coast and let the heart rate settle to prepare for the bigger climb ahead. 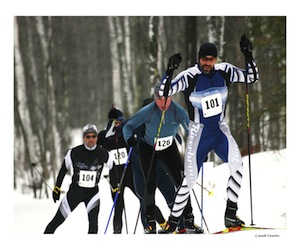 But I noticed I was gaining on three people just ahead of me. If I could just speed up a touch I could pass them.

No no no. Passing them on that climb is not a good strategy. You’ll blow out your lungs and won’t be able to sustain the pace for the rest of the ride. Take it easy; settle down. Stop worrying so much about the competition and focus on the integrity of your own game.

I ended up passing one of them, but not all. I made it to the high point of the race and much of the rest was downhill with a 10-minute climb at the end. I used the downhill to relax, and focus on the next challenge ahead.

The race started long ago.

It started when I began practicing and attending clinics; and with the training. It started when I downloaded Runkeeper and tracked my progress. Then I set a goal. I wanted to do this in under 1 hour 25 minutes. Getting there involved the plan, the good habits, and all the work that went into arriving at the starting line that morning.

The hard work has already taken place. Race day is about showing up and putting it all into place. I work a little harder, but not by much, than when I was training all along.

What’s different about race day is the competition pushes you, but it shouldn’t control you. It’s wise to keep them on your radar but if you’re going to take risks you wouldn’t normally take, be sure it’s strategic and sustainable. Stupid risks like passing on tough climbs mean you might not even make it to the finish line.

I was on the final stretch and pushed all the head games out of the way because I’ve still got that long climb still ahead of me.

“Don’t get complacent. The finish line is still a ways off.”

I came around the corner, and I heard the cowbells and the cheers. It was actually sooner than I anticipated.

I crossed the finish line, and heard the official shout, “One hour four minutes.”

I had to double take over my shoulder. One hour FOUR MINUTES?

YEAH. All the work paid off. I felt elated. All that mental stuff in the beginning was but a distant memory.

The race is always more fun after you cross a finish line, but it’s never over. Time to get ready for the next one.

What’s your favorite part of the race?

That second photo I borrowed from Mt Ashwabay’s Summit Race.