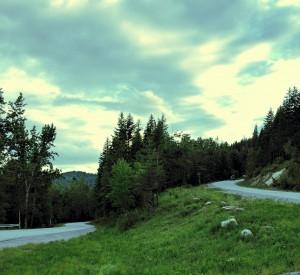 I’ve been thinking about the small decisions we make and the trajectory of time – how a small decision can take you down a very different path.

I don’t know if it’s because Mercury was recently in retrograde and everyone in my circle ignored the common advice not to do anything drastic, or if it’s just a matter of “like attracting like,” but I have a lot of friends making change right now, or as I like to call it, taking a big leap.

Joe sold his home(s) and he and his wife and young son are traveling via motorhome throughout the Southwest while he continues to work and blog about it daily. Forest enrolled in a global communications course in Spain and just moved out of her home in North Carolina, putting everything in storage. A client, the CEO of a company based in Tucson, just wrapped up a six-week experiment living and running the business from France. My friend DJ is seeking his passion right now. He just left his job (which he had terminated his own consultancy to take).  Another few friends had their own businesses, then took a job, then relaunched their businesses. Like me. Two friends are leaving their jobs to start their own business.

And it all restores my faith in humanity because it makes me happy when people don’t allow convention to keep them from doing what they want to do, and live life on their terms.

It takes courage and we all have varying degrees of it. I might have had the nerve to quit my ski resort job to start Big Leap Creative however, I did not attempt to, or even consider summiting Mt. Rainier with my good friends yesterday. You see, courage comes in many iterations and we can worry about how much we have or….not.

Also, I’ve rarely seen a big leap end in a splat. I’ve taken a bunch of them in my own lifetime and even when the landing or the airborne part doesn’t go as planned, I find myself far ahead of the spot from which I leapt.

I was out on a trail run two weekends ago. I’m training for a race in Alaska and I’ve been having a rough season this year after having the best year ever just last year. I was supposed to do 11 miles and I only made it to nine. This time of year, 11 shouldn’t be hard for me. Naturally, I’ve been down on myself and feeling utterly discouraged. What’s wrong with me? My lungs weren’t cooperating, my thighs felt leaden. This sucks! and then, my sheer ridiculocity (I know. But it should be a word.) hit me.

I was on a beautiful trail in the woods. The sun is out, I can see the lake, and the beargrass in bloom. Pepper, my black lab, is leading the way and setting the pace. This is what it looked like.

That’s when I snapped out of it.  What the hell is wrong with me, after all? Sure, I’m sucking it up all over the place. But I’m running. and I’m here. And it could be fun if I didn’t worry about pace.

I pushed through this phase. I ran my shorter runs during the week at a slower pace but tried to do that thing… what’s it called? ENJOY it. and yesterday? I got my 11 miles in. Still slower than expectations.

When I stopped worrying about where I should be, it suddenly became more fun. The exact same goes for business.

Ten years ago this week, I launched Big Leap Creative with a zero-balance credit card and a few notions: I was totally bored with my dream ski resort marketing job. I needed more of a challenge. I didn’t want to move. There are no other jobs for me here. I love working independently.

I want to be a graphic designer!

So I took a month off from work and set about to teach myself graphic design. Yeah, it doesn’t exactly work like that. I quickly learned it’s not just a matter of teaching yourself Illustrator and InDesign. It takes years to be good. And, as it turns out, you have to have talent.

I subsequently went back to the “drawing board” where I drank copious amounts of wine, and thought harder. My favorite part of my job was the PR part of it. So I went back to work at the end of the month, sat down in front of my boss, and outlined a vision. They agreed to be my first client and the first door opened with many more to come.

Much has changed in 10 years. I think my courage level continues to rise (clearly not enough to consider a Mt. Rainier summit) but I know I can do things like take big leaps without having all the answers other than a vision of what I want and don’t want, the willingness to course correct while I’m still up in the air, and the acceptance that I will never be doing as well as I think I could be.

There are going to be challenges and setbacks along the way. We’re going to have days that suck – days where we have to force ourselves to “show up.” Maybe just know you’re doing what you can do now and remember to enjoy it because you’ll look back on the last 10 years and think –  those slow runs were very temporary and thank God, for five minutes I had the idea I wanted to be a graphic designer. I wouldn’t have become who I am now.

Before you leave me: I want to hear about your big leap or the one you are contemplating. I used to run your stories on Fridays but I’ve never been consistent with it. Maybe you can help me do that.