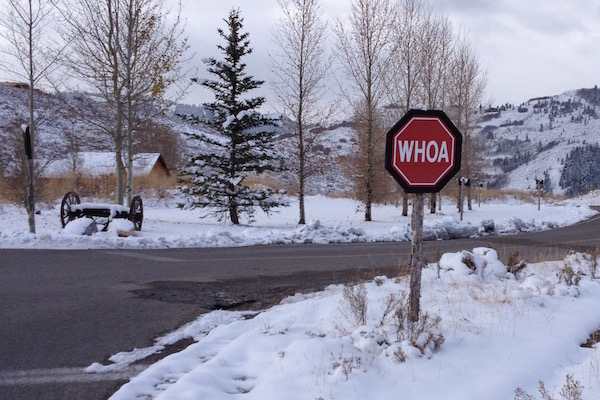 A friend once confided in me she got married and had kids at a young age because she thought that’s what you do; get married and have kids. Of course she loves her kids, but knowing what she knows now, she would have done things differently. Then, just last week, a colleague told me she wants to grow her business but she’s worried and not too eager about hiring employees. It’s been a bit of a theme in my life lately, so I thought I’d write about doing business, and life, on our own terms.

Instead of worrying about what should or shouldn’t be, it’s much more fulfilling to think about what can be. And to set about making that happen.

If you don’t know a lot about me, I live in the Selkirk Mountains and help businesses around the world connect with buyers by improving their digital communications. As I consult with CEOs from my deck, sometimes I will see a bear in the tree where a squirrel should be. I love it. It’s far from perfect but I share this with you because I’ve taken a leap or two to get here.

Further, I have never wanted kids of my own (I have a smart and beautiful step-daughter). I’m selfish with my time. I’m terrified of the responsibility. For that and other reasons, I don’t want employees either.

My advice to my colleague went something like this: If you add employees because you think that’s what you should do, you might find yourself in the same situation as my other friend who got married and had kids, not because she was in love and wanted kids more than anything but because it’s “what you do.”

and you may ask yourself, well, how did I get here? – David Byne

In other words, there might be a way for her to grow business without adding employees. Why not explore it? There are various business models; different services she might provide that can grow revenue without building an agency.

The important piece is to be clear on the vision and not let convention keep us from going there. We each have the ability to be a case study in doing something successfully, in a way that hasn’t been done before. There is risk involved, and a big leap. But how else will you know? Is it better to stay put?

I have a tendency to look at who’s kicking ass around me and wonder why I’m not doing the same. Until I stop myself and realize it might look good from here but I honestly don’t want their life. Success, “growing business,”  – these are concepts that are defined differently for each of us.

Doing what they are doing, as admirable as it is, doesn’t allow me to do the things that matter to me – train for a mountain trail run, take a morning off to go skiing, work from anywhere in the world, work with clients I want to work with.

I’m doing what *I* want to do, on my terms. While what they have done is admirable, if I were in their shoes, I’d simply be coveting my other friends the ones on top of mountains, finishing 25k runs, and skiing in Japan (all things I did in 2016 so far).

See, you can’t have it all. Having a clear vision on what you want is first and foremost.

Know the difference between mimicry and copycatting

Chase Jarvis, in an interview the other day, said mimicry is the early stage of mastery. He used a bird as an example. The bird mimics it’s mom to fly out of the nest. If he didn’t have that to mimic, he wouldn’t know what the hell to do. and he’d die. To a degree we all mimic.

At some point, we draw a line at mimicking, and we curate ideas to make a better one. We get to question the status quo; wonder how it can be done better; and stop with the limiting thoughts based on how it “should be done.” In fact, maybe just delete the word maybe from our vocabulary.

I think the next step is to talk to anyone involved for input and feedback. Put together the plan and proactively address any objections. Let me know how that goes.

I have more to say on this topic. Stay tuned for next week.