My sister, Jackie was 12 years old when the guidance counselor came to her class for a guest presentation. But he realized he had left something in his office. He asked for volunteers to retrieve the items and everyone, eager to get out of the classroom for a few minutes, raised their hands hoping to get picked.

He picked my sister and one other boy.

They went down to the office to get the boxes and returned to find an exercise already in progress. The guidance counselor quickly brought the two up to speed: There are two triangles on the chalkboard. He asked, “Which one is larger than the other? This one?” He pointed to the smaller one and the entire classroom raised their hand. So did the boy. 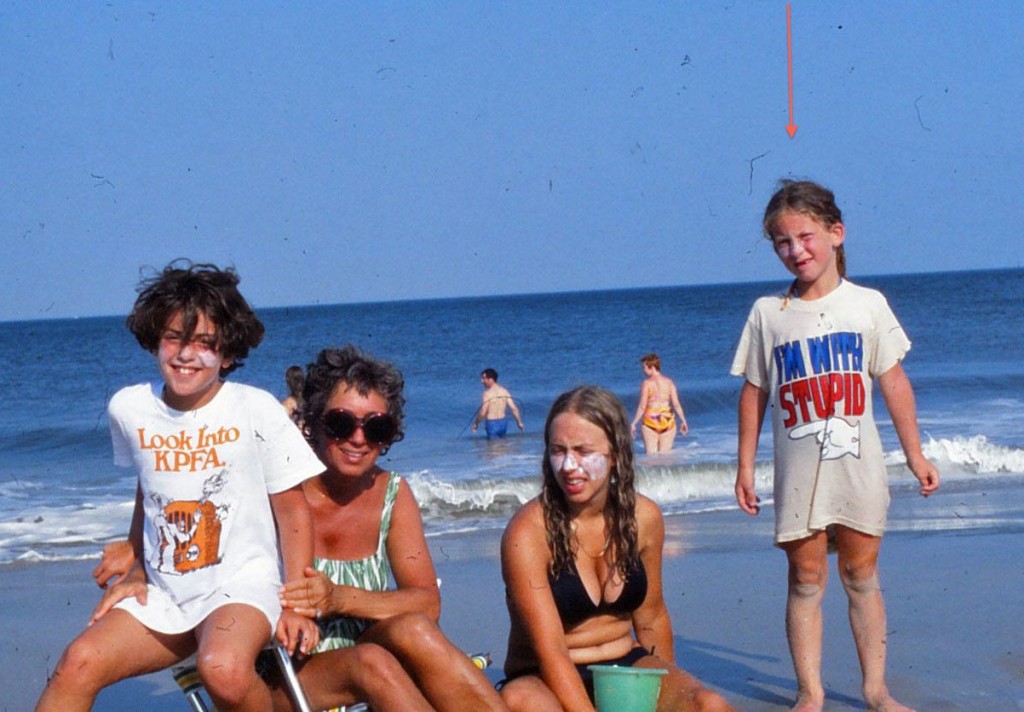 L to R: Me with the Dorothy Hamill haircut, Gramma Jean, Aunt Terri and my sister, “with stupid.”

He did this a total of five times; asking simple questions, and the classroom picked the obviously wrong answer. Jackie stood for what she believed to be the right answer even though she was the only one in the room to do so. She went against the grain four of the five times. The one time, she caved and went with the consensus even though she knew deep down it wasn’t the right answer.

By now you might have guessed the guidance counselor wanted to make a point about peer pressure. And while I personally think it was sort of a cruel joke to play on a 12-year old, maybe it wasn’t, since the story has stuck with her all this time.

She was proud of herself back then for taking the risk and being the only one in the room to raise her hand for the right answer. It’s too bad, she said, that she only did it 80 percent of the time, but she couldn’t muster the nerve all five times. It’s much easier to go with the majority and she had run out of energy.

I don’t blame her. It’s hard as hell not letting self-doubt get in the way when you’re the only one in the room with the idea. It’s enough to make you think the smaller triangle truly is the bigger one.

So here we are a few decades later talking about that incident. Jackie thought maybe the difference between just doing OK in business and truly kicking ass is directly related to our ability to be convicted in our own beliefs and decisions; to not let self-doubt and peer pressure cloud our way. That 20 percent gap is the problem.

Every single day, whether we realize or not, we are affected by social proof, peer pressure, and how things should be done. On each of those days, we make decisions in our businesses without even giving it a second thought, letting that room full of raised hands influence our decisions. We look at best practices, follow advice on blogs,  read books, and mimic those we admire because they are the authorities. They know how it’s to be done.

My sister wants to improve her 80 percent rating to 90; and eventually to 100. I think it’s a great goal for everyone.