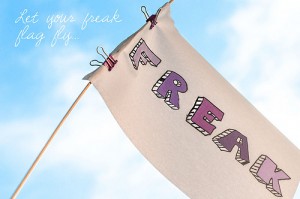 According to the Urban Dictionary, your freak flag is your unique, eccentric, creative, adventurous or unconventional self that is unsuppressed by social anxiety.

I don’t know about you, but I want that.

In a new business proposal last week, I included the following sentence: “If you’d like to read more on the topic, I blogged about it here (with a link back to my blog on measurement) but don’t worry, it won’t be on the quiz.”

I stopped. Wait. Do I want to keep that in there? After all, they are prospective clients. This is a business proposal. Aren’t I supposed to be more professional, more serious? Do other people include that kind of thing in their proposals? <– as soon as I asked myself that question, I knew I’d leave it in. Who cares what other people do? In fact, if no one else does it, that’s all the more reason for me to do it.

Every time we tell a story, which is every day, we have to make decisions on what details we include and exclude. I left this story out of last Friday’s post fifth grade peer pressure and the business lessons because it seemed too incidental to me. But I changed my mind over the weekend because when you start with the small things, the more audacious things become more approachable.

That post sparked a lot of offline conversation so I guess we’re not done with yet. Here is the quick version if you don’t want to go back and read it before you continue. My sister, Jackie participated in a social proof exercise. She didn’t know her fifth grade class was coached to give the wrong answer to a series of questions. The teacher asked which is the larger triangle and everyone would raise their hand for the smaller one, leaving my sister alone to stand up for what she believed to be the right answer: The actual larger triangle. This was stressful to her, because it was difficult to be the only one in the room raising her hand for what she knew and believed to be the right answer. She held her ground 80 percent of the time. She couldn’t muster the energy to do it the other 20 percent.

She and I discussed how life would be different for each and every one of us if we could stand solid behind our beliefs 100 percent of the time rather than just 80? In other words, what if we flew our freak flag proudly every day?

The Food Network’s founder (Reese Schonfeld) had to hoist his flag when he had the idea for the network. His wife and many others thought it was a non-starter idea. Who would want to watch cooking on TV all day? If Emeril Lagasse didn’t fly his flag, we wouldn’t have “Bam!” or “Take it up a notch.” His signatures would have been long ago killed if the network executives had had there way.

You can fly your freak flag at home!

That’s not all! This can work at home too! In a recent kitchen renovation, my sister had her eye on a particular sink, but she let her opinion be swayed by her husband’s input despite the fact that she had the ultimate say. He was just expressing what he thought and this turned out to be one of her 20 percent moments.

Now she has a sink she hates.

But she learned her lesson because when it came time to choose the trim. Again, she knew what she wanted but both the contractor and husband advised her against it. Still fresh from the sink, she knew to stick to her guns on the trim. In the end, both husband and contractor acknowledged her wise choice. She gets to look at her kitchen trim every day as a symbol of getting that 80 percent up to 100.

Let’s stop letting questions like “What will they think?” and “Is that how it should be done?” get in our way.

Hey, no one is going to get ahead by playing it conservative and worrying about what others will think or how it should be done. When I attended a conference in 2009 for PR agency CEOs and owners, I felt incredibly insecure that everyone would wonder why someone like me, with a small agency (one employee at the time) based in the middle of the mountains in Idaho would be there when they were mostly executives from larger markets (and larger agencies).

It turns out the very thing I feared – the thing that kept me from fitting in – was the very thing that differentiated me from the group. Others sought me out to talk to me. I couldn’t believe what was happening. It earned me admiration and respect! Now, I flaunt that which I used to keep tucked away.

It’s not easy going against popular vote. Ever. Start with the small things. Now tell me: How are you going to let your freak flag fly this week?