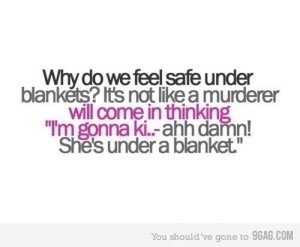 January 2013 will be remembered as the most difficult and suckiest month of my life.

After I wrote that crisis post two weeks ago, our family suffered a tragic loss.

It would appear the universe suddenly realized it had overlooked us when it comes to sad events. And decided to quickly catch up this month with not two, but three.

I won’t share the details here, mostly because it’s heartbreaking, but also because I’m not fishing for sympathy.

I’m writing about it because it’s all I know or care about at the moment. Also, I want to talk about getting out from under the covers and back into the real world after you’ve been kicked in the ass.

It happens to all of us. So I’m assuming you’ll have something to add to the conversation.

I closed the year with an ambitious agenda and what looked like four new clients kicking off on January 2. I have a blog to keep up, speaking engagements to prepare for, and a husband and two dogs who want to play in the mountains with me. Oh yeah! I’m also doing the Whole30 program – I’ve cut out grains, dairy, and sugar (Looks like I picked the wrong month to quit drinking.); and I’m training for the Cutthroat Classic in the Cascade Mountains this summer.

I’m generally a very positive, happy and optimistic person – not the kind who dots her i’s with hearts and signs off with smiley faces – but the kind who likes to focus on the good in everything and avoids the BAD. So I found myself trying to make the sadness go away. You can’t do that. Let it happen and if that means curling up in the fetal position, then do it. Blocking this stuff out doesn’t accomplish anything.

I was careful not to blow anything off. Any pressing client deadlines, I made. If I was able to put something off, I was up front about what was going on, and we re-adjusted. But let’s be real:

Our clients, colleagues and customers, can be sympathetic to a certain degree, but they have businesses to run as well. It’s unacceptable to let them down. That’s when you turn to your network and get help to deliver what you can’t deliver.

I allowed this to go on for about two weeks. Then I started to get out; not really by choice. We were invited out to friends’ for dinner and my husband accepted without consulting me which he never does. Imagine that. He knew I needed to get out amongst the living. It turns out it was pretty nice to get my mind off things and even though I mostly just listened, being around laughter and chatter helped more than hindered.

Your brain will forget how to be happy if you let it.

Losing your mojo sucks. It feels a lot like being trapped inside an invisible bubble, and the real world carries on outside.

I found what helps is to stay off social networks. At times like that, it can feel like you’re losing the Contest To Be The Biggest Game Changer.  Just give it all a rest. You don’t need that pressure right now and there’s plenty of time to go out and dominate. Later. Go to the place you can find some peace – for me it’s being in the woods with my dogs – what is it for you?

Be a hermit but not for too long. Work meetings, client calls, and new deadlines help speed you out of that vortex. Start to get out socially with people you enjoy, and don’t dwell on on things. I have my small circle of people I can talk to and outside of that, I resist the temptation to go on and on. (Except with you guys, apparently.)

It comes in waves.

Just because you’re having a better day doesn’t mean tomorrow won’t suck. I don’t mean to burst the bubble on your happy day. But be ready for two steps forward and one step back.

In the end, it would mostly be helpful if someone would come tell us to just snap out of it.

Which is what I intend to do. Next up, I’m writing about some incredible investigative reporting in the New York Times and how the future of journalism affects those of us in PR.