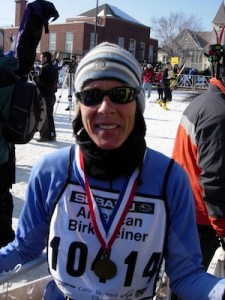 Each Friday, I ask a guest to share something personal: Some way they’ve balanced ambition with happiness; achieved a personal goal; and/or a way they have converted an idea into action.

I am not an athlete….at least not the REAL type who people admire, or chase for autographs, or get sporting companies to give them cool clothing and top equipment.

I grew up in the 60s and 70s when the idea of women in sports was primarily limited to cheerleading or the dance line. I mostly just rode my bike around our cul de sac, played catch with my dad, and ran around with the boys in the neighborhood playing “war” (this was the Vietnam era so war games were popular).

That was the extent of my “athletic profile.”

In the late 70s, the running craze was picking up across the country and people were doing running marathons. Suddenly, ordinary “non-athlete” people like me were running 26.2 miles. The joy these runners had when they crossed the finish line was contagious, I wanted to feel that way…..so I bought my first pair of running shoes and 20 years later, ran my first marathon. Imagine that, a non-athlete running a marathon!

I am a cyclist.

In the 80s, Greg LeMond was all the rage; the sole American riding in, and winning the Tour de France. The strength and will of professional cycling was so inspirational to me.I wanted the same feeling…..so I bought my first road bike and competed in my first race five years later. Imagine that, a non-athlete racing bicycles.

I am a triathlete.

To commemorate my 30th birthday, completion of grad school, and first REAL job, I decided to compete in a triathlon.  I figured I could run and bike and how hard could swimming be? So why not? PS. I highly recommend swimming lessons!

Then, I wasn’t content just finishing a triathlon, I had to do well, and improve my time each race. I was living in Minnesota at the time, working 60+ hour weeks and constantly traveling. It made training for a triathlon challenging to say the least. I stressed when meetings ran too late or started too early, or thunderstorms rolled in during the day and I had to ride my bike home. When I traveled, running shoes were always the first thing I packed. I chose hotels with a lap pool (although I admit I did do laps once in a wading pool).  Sometimes I would even fly my bike with me just to get the training miles in.

I am a Nordic skier.

Finally, I was introduced to Nordic skiing…..and I embraced winter like never before. I traded in my wet suit for a pair of skinny skis.  I ski for fun and fitness, I ski race and teach others to ski; and when there’s no snow, I train to get ready to ski.

Six years ago I decided to race the “ironman” of Nordic ski racing; the American Birkebeiner.  This event is held in a little town in northern Wisconsin. Ten thousands skiers battle it out over 50 kilometers of hills.  What an insane idea, I’m not really an athlete so I wasn’t sure I could make it. I did make it and the thrill of completing that race sent me back another five times.

That first Birkie was one of the hardest things I’ve ever done physically but with it came a new joy of accomplishment.

I am an athlete.

I still run, bike, swim, and of course, ski….I describe myself as active, but I’m still not sure about “athlete.” So what does good old Webster have to say? “An athlete is a person who is trained or skilled in exercises, sports, or games requiring physical strength, agility, or stamina.” Hmmm, maybe I am an athlete after all – still not an athlete that gets asked for autographs or receives clothing and gear from sports manufacturers, and I still pay for all my race entry fees. But I think I can finally include the word “athlete” when I describe myself and feel proud of that.