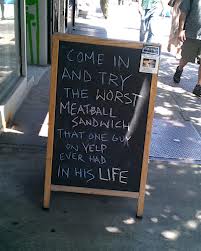 As we drove into Coeur d’Alene, Idaho this weekend, I consulted Yelp to find a place for lunch. We found our place – 64 reviews, with a 4 1/2 star rating. The photos looked good and menu was right up our alley. Purely for the entertainment value, I read some of the one-star reviews out loud:

I wasn’t really in the mood to eat…

– one-star review. Really? if you’re not in the mood to eat, don’t eat, and certainly don’t review it.

– one-star review. Oh man, you mean, he made an honest mistake? How awful for you to have to ask to get your beers replaced.

Online review sites are wonderful and terrifying at the same time. Totally wonderful in that they help us find that great little place that’s just right for us – best breakfast in town; great place to grab a beer; emergency 24-hour dry cleaner; you name it. They democratize the customer service process and allow consumers to do better due diligence before they make purchase decisions.

They also bring small business owners to their knees, giving the customer perhaps too much power, and we all know what happens when someone has too much power: The abuse of power.

When I received an email from a restaurant owner wringing their virtual hands because they had a horrible one-star review detailing their experience and what the “big juicy bug” looked like in the salad, I feel bad for these owners, at the mercy of the Jerk.

And with good reason: A Harvard Business Review study of restaurants in Seattle shows that a one-star boost in your Yelp rating can lead to a five to nine percent boost in revenue. Hate Yelp as much as you want to, but it matters to small business, and it puts your customer in control. Which is OK, if your customers aren’t assholes.

Like the guy with the bug in his salad. He brought it to the attention of the server who apologized and offered to replace the salad. He refused. The chef came out and introduced himself, apologized and explained they buy organic greens and sometimes bugs get missed. Not that it’s acceptable, but that’s how a bug gets in greens. They live there, don’t ya know. He also offered to send out a new salad but was again met with a “no, thank you.”

Instead the guy went home and took to Yelp to write a long review about the big gross bug and how their meal didn’t get comped.

Call people out on it.

I’m a big fan of taking the high road but it’s also important to stand your ground when someone is abusing their power. Be firm short of stooping to their level. Respond to the guy, but do something like this: “We are very disappointed if anyone has a negative experience at such and such place. But we are even more disappointed you wouldn’t let us fix the problem when you were in the restaurant as we tried to…”

More than likely you’re not going to turn this guy into a fan. Maybe you will; but do you care? Do you really want him back in your business? Probably not. However, you do want all the nice people who come by later and read that review, whether as part of their due diligence or like me, for pure entertainment value, to know you care and responded, and for them to make the assumption that this guy is a jerk.

Don’t let the jerks win by taking this stuff personally. If you let them affect you, you’re going to spend a lot of time on a roller coaster ride with one- and five-star reviews. Man o’ man. Take a deep breath, don’t obsess on your reviews, and manage them accordingly. Don’t let these people bring you to your knees. Don’t lash out – be cool. And know this one-star review will absolutely not be the last one.

Yes, you, my friend, have many one-star reviews in your future.

Listen, dear business owner: Your prospects and customers are smarter than you give them credit for. Do what you do and continue to do it well. Most of us know what to look for when researching a place of business. We expect businesses to have a negative review here and there – we wouldn’t trust it if you didn’t. We also know there are many people out there who fancy themselves the next New York Times food critic and are total jerks enjoying their power at your expense.

But it doesn’t have to be at your expense if you keep a level head about this stuff and don’t go off the deep end lashing back at your community like Amy’s Baking Company did or offer a 25 percent discount if you give a one-star rating just so you can be the lowest rated restaurant on Yelp and supposedly “tank the system” on your own.

Because that stuff might be cute and clever (in the latter scenario), but it’s not why I want you to get on national news. Really. That’s when “they” win.