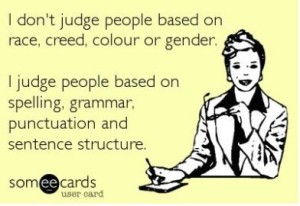 I won second prize in a really difficult grammar contest against a room full of PR agency owners and CEOs.  I like to talk about that as frequently as possible.

I almost didn’t get married because in our very first argument in the first month we were dating, I interrupted Patrick to tell him “also too” is redundant. He became so infuriated, he almost walked out the door never to be seen again.

So when the client I’m working with suggested a tagline that uses the word “less” when it should be “fewer,” I got ready to put up a fight. Then they asked me if it’s really important to be grammatically proper. Look at Apple and “Think Different.” Look at all the signs in the grocery store express lines that state, “15 items or less.”

I stopped to think about it and thought I’m going to be twitchy for months if we use this. How can I stand by it?

So I talked to some colleagues and friends I respect and I turned to Facebook (If it’s spoken on Facebook, it must be truth). I received a mixed bag of feedback but some of the sticklers – the ones just like me – responded with “break the rules if it makes sense.”

And She Flip Flops

I love language. So I’m all for preserving it and abiding by the rules. However, I also like to start sentences with “and,” although I draw the line at ending a sentence with a preposition.

We bemoan losing our language to texting and social media with hashtags and acronyms because we’re communicating with different limitations now; limited characters and at a faster pace.

There’s a difference between losing our language and evolving it. I don’t know where that line lives. Adding LOL to the dictionary might be on the wrong side of the tracks. Taking the hyphen out of email is on the right side. But who gets to decide?

And then there is the idea of just plain breaking the rules because you’re more concerned with moving product than making us English geeks feel happy. Why not bend a rule if the flow is much better?

My friend Jon Goldberg of Reputation Architects said he chuckles every time he sees the “15 items or fewer” sign in his grammatically proper grocery store.

Rules Are Meant to Be Broken

What I love about language and writing is the flow; putting words together and the sound and stories they elicit. There is a rhythm and that’s why it’s always important to read your writing out loud.

Creating a positioning statement might be one of the greater language challenges. You have to make an emotional connection with the audience in a split second. When you have four to six words to tell the story of your service or product, grammar be damned – let’s get the word across at all costs.

Ken Mueller pointed out Pennsylvania’s slogan: “You’ve Got a Friend in Pennsylvania ” I had to stop and read it a second time – it didn’t sound wrong – until I realized the error and then I thought “OW” but it’s speaking the language of the consumer and it gets the point across. How about “Got Milk?”

Our language is evolving because we use it differently. and it must therefore adapt. Just like religion, antiquated laws, and Blockbuster Video should adapt, our language must do so as well in order to serve us in our current needs and challenges.

So we write in shorter sentences and paragraphs. We use a more informal, conversational lexicon. Contractions become the norm. We start paragraphs with the word “so.”

We have to get a message across in fewer words to an easily distracted, very rushed audience who probably won’t even notice we said “less” rather than “fewer” and certainly won’t boycott the product over it. Although it will give some the pleasure to point out our error, in which case we can be happy we provided them that experience.

My twitch will subside soon, and I tossed my vote in the hat for “less.” In this sense, it just has better flow and rhythm.

Can Marketing Break the Grammar Rules?

I’d love to hear your take. Break the rules or abide?

We can help with content marketing problems. Need a fresh set of eyes on your content and your strategy? Schedule a one-hour consultation and we’ll help you get your content on track: