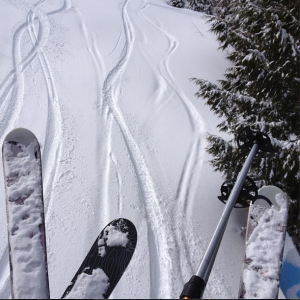 When I was a kid, my parents made me (and my sister) go to ski school. They’d take us on ski vacations to Colorado and put me in weeklong clinics. I didn’t like it at the time. I was young enough I still wanted to hang out with my parents. My Dad wanted me to learn how to ski properly; to build the right habits instinctually, and once I could keep up with him, I was allowed to choose if I wanted school or not.

Now, skiing is a fundamental part of my life and I am thankful for the early foundation and the good habits I created. I live at a ski resort and have built a life around the ability to go out for a few hours in the morning if it’s a good ski day – While still running my business, and handling all of my other personal and professional responsibilities.

When something becomes a habit, it just becomes part of your life.

And I can’t ask someone to go ski for me, it just wouldn’t be the same thing.

When I get asked “Should I outsource social media?” My response is almost always “NO.”

Why do social if you aren’t willing to do it yourself?

The answer is likely you don’t know how, and you don’t have the time. So you need to go to ski school. You need to learn how to do it, and how to integrate it into your company so it just happens. There is no question of finding the time. It becomes fundamental to your operations.

By hiring out your social media to “experts,” you are effectively beginning with bad habits, and building a community on a faulty foundation. Remember, it’s social media. Social media or digital marketing consultants should be used to teach you how to implement your own programs; not to do it on your behalf.

A good social media strategy becomes fundamental to the operations of the organization. It isn’t considered an initiative that takes too much time. The right people are organically building relationships, getting to know their audience; and engaging in intelligent and meaningful conversation that tie back to the strategy.

Only your “kids” love your brand as much as you do.

“A social network succeeds or fails not by its own, but by the people who breathe life into it or suck the air from it.”(Danny Brown quoting @T-burrows in the comments of this post.)

Any passionate skier can tell when a ski resort hires an agency that doesn’t know the business by the lingo and by the photography – usually, a skier in a neon one-piece suit or the skinny skis, both from the 80s. It’s obvious to us but possibly not the mainstream, and it’s laughable.

Your passionate niche audience knows when it’s not you because you aren’t speaking their language. Rather, they recognize it’s a group of hired hands using pre-approved talking points.

Kick and scream all you want on your way to “school,” but if we don’t learn and integrate this stuff into our corporate cultures, both the opportunity cost and risk to reputation are enormous.

When social is humming along as it should, you have all the right people monitoring the conversation and seeking conversations from both a reactive and proactive standpoint. The CEO can pop in and apologize when needed, a customer service representative is empowered to help and solve problems instead of responding to a Tweet asking them to “call customer service.” A Facebook complaint is handled appropriately, rather than by a person who was trained to say, “Please private message us and we’ll call you.”

This is why I’m not going to manage your Facebook and Twitter pages for you. I will, however, help you with a strategy to build community. I’ll help you determine what to share and who to connect with, and how to do it. Learning to ski when you are older is intimidating. You are a lot further from the ground than when you were four years old, so you have more to lose. The experts will promise to share X number of updates per day and grow your audience from A to B, but what good is B if they aren’t engaged and buying?

If it were called broadcast media rather than social media, I’d understand.

But it’s not. Having someone ski for you, just isn’t the same.

This is a modified version of my post that originally ran on the Vocus Blog. I want to thank Catrina Sharp for the great comment over there that prompted me to change the headline and re-work the article.