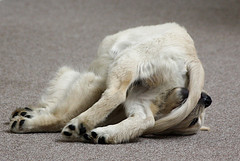 October, the month of planning, and downtime, is over, and it’s time to get serious!

Welcome to the new site and an enormous thanks to  Joe Hackman at Managed Solutions and Dave Yankowiak of Lift Development.

They are not only awesome to work with, but delivered the project on time to the day. And? They communicated visually, exactly what I asked for.

Let’s do a quick recap of the month: Everything was going along swimmingly. I’m not even nervous (But wait, shouldn’t I be? I’m always nervous about everything I do. This can’t be a good sign.).

Last week, a perfect week in the middle of a perfect month, I got the news: Disappointing news that I didn’t get the project that was a perfect fit – the perfect project with which to re-launch Big Leap Creative.

It felt like a kick in the stomach and at first, I sort of wanted to cry right there in front of the person who was breaking the news to me in a super matter-of-fact fashion. And all these familiar yukky emotions came rushing back in like a floodgate that just opened into my familiar past.

I safely and gracefully extricated myself from the conversation (for a change), and my next instinct was to go find my husband, a big cocktail, a dog or two (since I do have two), a couch, and a gallon of ice cream and curl up.

And then I had a better thought:

It was a pretty cool moment when I decided not to let this ruin my day, let alone my ego. In crisis communications, we talk about putting a lot weight in the reaction to the situation, and less on the actual situation itself. Let’s apply those same principles here, shall we?

Remember the devastating break-up in high school? You thought he/she was the one, didn’t you? No one, seriously, NO ONE could make you happier ever. You lost your one chance at true love.

So, back to my conversation with this person. At that very moment, I was determined to banish those unwelcome emotions right out the door.

I realized this project doesn’t define success, and let’s set sites on the next thing that’s bigger, and what will happen to win that? If we keep doing things the way we’ve been doing, keep chasing up the same tree, returning to the same sources for business, and using the same processes to do,we’re going to continually get the same results.

It’s time to stop living the definition of insanity. Not every project, job, client, customer, boyfriend, or whatever is the right one for you whether you think it is nor not. It may be hard to see that when you’re in it, but you’ll realize later.

So make later now. Move on to the next target and make it bigger and better.

Disrupt your own life; your own business.

It’s hard to change course when you don’t have a track record. I am inspired almost daily by people who are making change happen.

It’s OK to get the proverbial kick in the stomach, and to say, “yeah, I didn’t really need that anyway,” but something must come from it. What are you going to change to win the next project that is bigger and cooler?

So that’s my little lesson on not letting the crap get you down. The next time you get that bad news and you feel like you just took two steps in the opposite direction of your goals, think of that ex on Facebook you’re relieved you didn’t end up with. Roll over onto your back, and throw your hind legs over your head, and grab that tail, and move on to the next thing!

I know you all have a story of moving on, and disrupting your life. I’d love to hear it. Inspire us!

* Thanks to Daniel Davies for the great creative commons photo on Flickr.