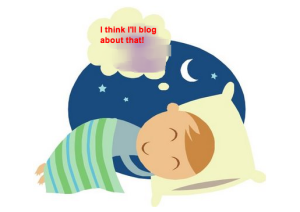 The first night I dreamt in French was a memorable one.

It was during the year I lived in Paris and it meant the language had finally sunk into my psyche.

The night before, I kid you not, I dreamt of messaging on landing pages, calls to action and the sales funnel for a client.

What does that say about my psyche now?

Back to last night: This morning I awoke up instantly remembering I had had a brilliant blog topic idea in semi-sleep. I keep a pad and pen by my bed for these flashes of so-called brilliance but fortunately it only took me a minute to recall: Patrick had gotten into bed with such a thud waking me up with a start and scaring the crap out of me. He was sound asleep snoring before I could fall back to sleep.

Apparently, in Stage 3 of sleep, my brain thought that would be a fascinating topic to blog about.

Technology and the digital world are embedded in our psyche now; this goes without saying. We can stop talking about “social media” and how it is changing the world.

I stopped attending social media events because people sat around talking about tweets and taking photos of each other standing next to each other and tweeting them like this is a big deal. See? We’re out in the real world. We do get out.

I started this post a few days ago not knowing where I was going with it then I read Danny Brown’s article on how social media is being misused and it started to take shape.

It’s the lifecycle of anything. It starts off small and cool; gets mainstream, mass-ified and bastardized; and goes through an attrition and consolidation period. Like anything.

Take Industrialization as an example: Industrialization did many good things for the world. It created jobs, improved the economy, helped small businesses get their product to a market. Along with it came mass production, loss in quality, lower prices (and along with that the good and the bad.) and attrition/consolidation. 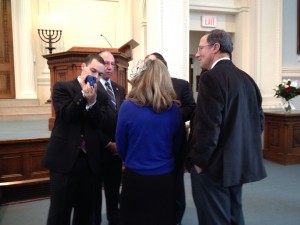 In the evening I might be trying to find some balance and force the household to put the iPhones away so we can talk to each other. Remember that? While the next day, I’m forever grateful for the same device that allowed my Father to be FaceTimed into his mother’s funeral from his bed in the ICU.

Yes, that’s my brother, holding my Dad in a circle with his siblings, talking to the Rabbi. Pretty moving stuff!

Geoff Livingston wrote about losing ourselves in the digital era this week. (There must be something in the air?)

The digital world can, if we allow it to, enable us to no longer believe in our own selves because we become addicted to the social validation we didn’t have before. Geoff’s post and my own self-talk remind me not to equate my self-worth with the number of @mentions, likes, and +1s I’ve received.

With what seems to be the ebb and flow of my life these days, I get more validation from the comments and private messages from you guys I start to get withdrawals if I haven’t posted in a few days.

The digital currency that does matter is when I receive the “You have a new subscriber” email. It gives me a smile each and every time knowing someone saw enough here they wanted to give me their cherished email address and invite me into their inbox a couple times per week so they wouldn’t miss anything.

What is my point? Technology – love it, hate it…. it’s changed everything; it’s changed nothing. All I know is I’d rather be dreaming in French right now.