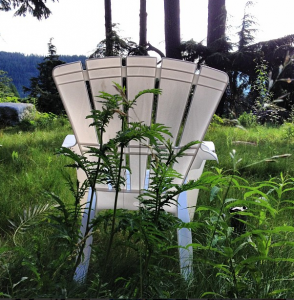 “You guys, we seriously need to get organized.”

My family still makes  fun of me for saying this on a pit stop during our road trip down to Rehoboth Beach. The car was a mess! And it was driving me nuts! There were games scattered, and trash on the floor. I couldn’t continue on the trip if we didn’t get organized first.

So I was eight years old at the time; who cares?

Because of that, I get it when a client of mine said she’s not ready yet to tackle her new business goals until she closes out and organizes what she has going on right now. The only thing is, life doesn’t work that way. We don’t often get the luxury of starting new projects with a clean slate. Sometimes we even have to start before the idea is fully developed.

Accomplishment doesn’t happen in a linear fashion even though we think it should. “This is my goal, this is how I’m going to achieve it typed up in Helvetica 10 point font, and here is my timeline. Ready? Set! Go!” That’s the fairy tale version of Getting Things Done.

We listen to podcasts and watch interviews of people achieving success and as they recall the process, it sounds tidy, like it was part of a plan that was outlined in advance, and followed. In hindsight, it all sounds glorious.

That’s my writing chair pictured above. I write the first hour of my work day and Saturday mornings. I might be writing for this blog, or for other blogs I contribute to, but two days out of the week, I work on my book project. That’s two hours a week, I’ve promised to that book.

My Mom sent me a story the other day about a woman who had planted five acres of daffodils on her home on a mountain top. The vision was a stunning swirl of a variety of golds and yellows. Many varieties  had been planted to create a beautiful pattern. One woman had created this garden on her own, planting one bulb at a time for about 50 years.

Mom said it reminded her of me sitting in my “writing” chair.

I started the project without really knowing where it was headed. That was hard for me to do. How do you start something when you don’t have a plan? We must get organized first, right?

I’ve discovered “No, not always” and it’s released me from a lot of unnecessary pressure.

I love to write and I think I have a story to tell. So I just started writing stories. I don’t know the title, whether or not I’d sell it or give it away for free. I’m not going to figure it unless I start writing.

If, instead, I stepped back and attempted to write a plan with a premise and an outline, I’d never get it started let alone completed. I’d be overwhelmed. I am overwhelmed! With work and life. So, I work on it two hours a week.

I downloaded Scrivener based on a recommendation from Mikes on Mics podcast because I know later, I can organize and shift the stories around once I know what the hell I’m doing.

I had several hundred words already written when World Domination Summit helped me crystallize my book idea. On the drive home from Portland, I banged out the first chapter to the book. I thought it was the foreword at the time, but now I realize I want to ask someone super interesting to write the foreword.

Then I read this post by James Altucher which is off the hook comprehensive for publishing a book on your own. James said an average book is 40,000 to 80,000 words. I wrote 1925 words in my morning session Saturday

There you go: The first draft of my book is due October 15. I just entered that on my calendar.

I don’t even know if it will be good. I’ll have to edit it afterwards, and ideally, I’ll hire an editor. Then I’ll need a designer to do a nice cover and layout for me. Maybe then I’ll have something worth publishing. There are a lot of things I don’t know. I am going to let the process unfold as I go rather than try to wrangle it into that pretty, tidy document that tells me where I should be when.

This isn’t about writing a book

This is about tackling that project you have in mind. The one you will start as soon as <fill in the blank.>

I get it; I totally do. We think progress and accomplishment happen when all is laid out for it to do so. In reality, it happens with a stolen hour here or during that 15 minutes waiting for an appointment. When you add all those stolen moments up, you get a completed project.

I once marveled at the speed in which a robin built a nest outside our home. How did she do that in, like THREE days? My husband explained, “because she’s not effing around on Facebook.”

One last thing. That doesn’t mean the car doesn’t have to be cleaned out at the gas station. This road trip canNOT continue until it is.