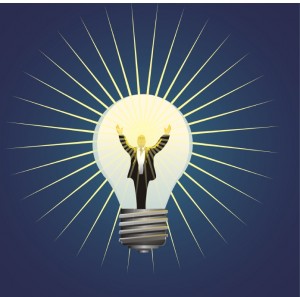 The other day, I came across a LinkedIn Profile with “thought leader” in the bio headline. Aspiring to be a thought leader in the industry is admirable. Saying it about yourself might be less impressive.

This is how we sell ourselves our now – by being authoritative on a subject matter or perspective related to the industries in which we operate. I found myself  contemplating what it takes to do that when I attended the Masters Tournament practice round at Augusta National last week.

It started on Sunday night, the eve of our visit. My father was so excited to finally see it in real life, he was getting choked up. He’s watched it on TV every year since it was first broadcast (1956). This is the only major tournament he’s interested in attending, and as he recounted some of the stories of the Masters, he had to stop a few times to regain his composure.

I understand. I get that excited when I’m about to see my favorite band in concert or a speaker I am particularly inspired by and dedicated to. We all get excited when we get to connect on a level that hits that passion chord just right.

The founders and current board of Augusta National and the Masters Tournament have hit upon something. They’ve tapped into and retained an emotional bond that has sustained several decades and continues to draw new members into its community.

They have it easy, you might say. With a golf talents like Tiger Woods, Arnold Palmer and even some of the hot guys coming up amongst the ranks, and stunning grounds such as Augusta National. It’s easy to cultivate this excitement. But I would disagree with you. It takes a great deal of focus, perseverance, and self-confidence to do that. We can learn from it.

Holding on the the past is a good thing

In 1931, the Fruitland Nurseries in Augusta, Georgia was purchased, and Bobby Jones would soon thereafter realize his dream of building a championship golf course. Augusta National opened in 1932; the first Augusta National Invitational took place in 1934;  the Masters Tournament was christened in 1939.

Now, here’s where it gets good. The founders of this course knew exactly what they wanted to be, and the legacy has been carefully upheld. Codes of conduct were developed to maintain it’s integrity.

In fact, the code of conduct hasn’t changed in the decades since it was created. From this year’s program:

In golf, customs of etiquette and decorum are just as important in golf as rules governing play, and that excessive celebration by a player or his “partisans” is not proper.

“Most distressing to those who love the game of golf is the applauding or cheering of misplays or misfortunes of a player,” Jones wrote. “Such occurrences have been rare at The Masters, but we must eliminate them entirely if our patrons are to continue to merit their reputation as the most knowledgeable and considerate in the world.”

One thing however, was updated: Absolutely no smartphones allowed on the premises. Which means I didn’t get to rub it in on social media all day.

Traditions and rituals were established and continue to this day from the first dinner for Tournament champions, suggested and hosted by Ben Hogan, to the green jacket, and the honorary first tees by legendary players. Augusta National has never wavered from its vision, its values and its traditions. (Even to a fault: They’ve only accepted two female members to the club and that was recently, in 2012.)

The Magnolias on Magnolia Lane were planted before the Civil War. In keeping with it’s foundation as a plant nursery, the holes are each named after a plant or bush.

Knowing when to hold ’em and when to fold ’em is important.  Whether you agree with their values or not, this is an event that has retained focus. Each year, the tournament becomes richer from it’s history and tradition.

Honor your community and weave their stories into the experience

The rituals and traditions have become the fabric of the tournament. In 1956 President Eisenhower asked Augusta National Golf Club to remove the tree on the left side of the 17th fairway because he kept hitting it. (My advice to Eisenhower would be to aim for the tree next time. Then he’s sure to miss it.) The club denied his request. As a compromise, they offered to name it The Eisenhower Tree and it has since become a beautiful symbol on the course until a storm destroyed it last year.

I imagine the scene at the Board meeting as they debated his request. “It’s the President of the United States! for crying out loud.” But they can’t set a precedent, can they? And they stuck to their values in the end.

In 1958, a Sports Illustrated columnist coined the difficult corner of the course where the 11th green, 12th hole and 13th tee meet “Amen Corner.” He said if you can make it through this corner at par, you should offer up an “Amen.” Signs on the course today lead you to Amen Corner.

Plaques mark where historic and record shots were hit. Bridges are named after golfers dedicated to their remarkable performance and spectacular shots.

These are the stories that make an average golf course or tournament more of an experience. Rather than just walking around a golf course, I can learn about who made exciting shots from really difficult locations and who landed in sand bunkers. I was getting pulled in.

Tickets are extremely difficult to purchase, but if you “win” the lottery opportunity to do so, they cost $50 for practice round and $75 for tournament. (That price increases one thousand percent when you try to buy them second-hand)

They could get away with charging much more for any of those items, but they don’t. The Masters Tournament may be strongly rooted in tradition, but it does not discriminate amongst the classes making the sport approachable to all.

What it takes to be a “thought leader”

You’re not running a world famous tournament with the best players in the world on the most beautifully manicured grounds. You think you’re not in a position to achieve that level of notoriety or cult-like fandom.

Wrong. We can create a connection based on shared excitement. If we embrace the same passion, even more so than our buyers, we stay true to shared beliefs and become an authority; a leader in that space. Upholding traditions and values beyond anything else – even the President of the United States – and having a confident idea of what we stand for is cool too. When the Augusta National Board modified the golf course in 2001, many of the top players were highly critical. The board’s response: “We are comfortable with what we are doing with the golf course.”