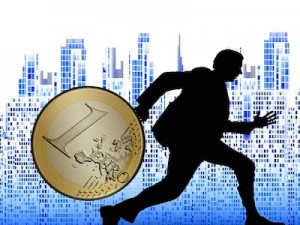 I was furious because Patrick and his partner work really hard outside of their (more than) full-time jobs to realize a dream and a vision to have their own winery. I was furious because some jackass pulled up one night and felt it within rights to hitch up that trailer to take it away and make some quick cash. Meanwhile, this is a piece of equipment which is very much needed for basic operations at the winery.

The worst kind of thieves are those who take not so much the material stuff, as the intangible stuff and get away with it.

The phone rang the other day from a number I didn’t recognize and instead of my usual look of horror and wonder (“who would call me?”), they caught me in a soft moment and I answered. The woman wanted to sell to my client, ad space on a television screen at the point of sale of a major grocery store chain. I gave her my standard response. “Can you please email me the information and we will review it. Although, I should tell you the 2014 budget has already been created.”

But she wanted to meet with me in person. They don’t have anything to email me. They like to do everything face to face. It’s more personal. But I don’t have the luxury of the time to get face to face, so can you send me a link to a website? No, we don’t have a website.

I can’t do business with you because you’re not interested in my needs. I hung up, furious because I see someone with a dying sales model, doing nothing to save it.

I work remotely from my home office in the mountains for clients in many time zones. For that reason, I make a point of getting out of the house regularly to see human beings in three dimensional real life.

We all make decisions every day which events are worth the time and money to attend. And so it was, I had decided to attend an event two hours away (each way) – a half day workshop on a topic I could use some brushing up on. Always learning, right? While I’m in town, I’ll schedule appointments, and maybe I’ll even meet some interesting people!

The first presenter began with some statistics on mobile usage. And then attributed those stats; “I found them off the internet.” I had to stop myself from blurting out from the front row, “Then it must be true!”

It all went downhill from there. She proceeded to share a case study of a “very successful” campaign they conducted for a client and showed us all the pieces but left out any discussion of results. I asked her how the opt-in rate was and she said, “It was really good. If you make an offer your audience wants, you’ll get great opt-in rates.” Again, sounding authoritative to some in the audience, I’m sure, but not demonstrating any real business results. What would have been a better answer? “The opt-in rate was such and such and we were able to convert X percent within 6 months.”

I fell apart when a slide hit the screen with six typos/grammatical errors on it. The issue is, the speaker clearly hadn’t put in the hours preparing and practicing. I believe it was Mark Schaefer who said he puts in an hour of prep for every minute of the presentation. That sounded about right to me. The speaker broke many rules in Rob Biesenbach’s 11 Deadly Sins of Presentations, performing off the cuff and relying on her copy-dense slides.

That’s seven hours of my life I’ll never get back. And I think about the others in the audience unknowingly and innocently, gulping this stuff up.

The worst kind of thieves aren’t doing anything illegal although it should be considered a crime. They think everything has a quick and easy solution while the others are putting in the hours and the hard work to get where they want to go. They rob us of time, and they spread bad ideas that inhibit us from performing our best. “Because it’s on the internet” does not make it true. Because a person is behind the podium, does not make them an expert.

It’s as bad as stealing that trailer.

Stay curious, friends, with a healthy touch of skepticism. I implore you.