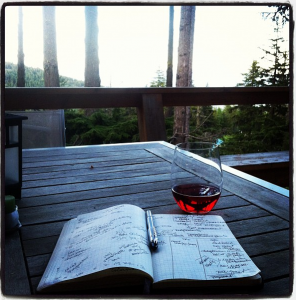 It drives me crazy when the server takes your order without writing it down and either gets it wrong, or has to come back to verify a detail.

But actually that’s not what this is about. This is about why I think the book The Secret is a crock.

The recession affected our household in early 2008. Big Leap Creative lost a few key clients and Patrick’s real estate business started to decline significantly especially because he is in the second home market.

Also, we were putting on a wedding later that year. Ours. So the precipitous drop in household income was felt like a cold metal lump in my belly and throat. I was panic-stricken.

If there is anything that can push a couple apart, it is this, but this just pushed us closer together. We ran through the absolute worse case scenario and determined it was live-able. Having that net in place, we instead focused on the positive.

Desperation leads to interesting things – one thing we found that worked well and don’t laugh at us, was playing The Secret on the iPod as we went to sleep each night. We’d set it on sleep and listen for 15 or so minutes. After a few weeks, when we got to the end, we’d start it over from the beginning.

In hindsight, I love that we did this. It was a good idea to be lulled to sleep with positive messages rather than relying on our default night-time psyche which tends to cycle into worry and anxiety and accomplishes nothing.

But here’s why The Secret worries me:

According to the book, the Universe will give you what you ask for. Just ask for it. Create the vision (make a vision board!) and watch it all land on your lap. I seem to remember the story of a guy who took a deposit slip and edited the numbers from 5,000 to 5,000,000 and he realized that dream a year later. I might have the details of the numbers wrong, but that was the gist of it.

For grins, I tried that tactic, by the way. I had nothing to lose. And it hasn’t yet worked. For the record.

Why You Should Write the Vision Down

If you make a vision and a plan for what you want; if you write it down, you will achieve it because it gives you something clear and concrete to work towards. They leave this part out of the book – that part where you have to put in your 10,000 hours to achieve what you want.

Last weekend, I had a really thought-provoking breakfast with George Rosenberg, coach to PR executives and agencies. He asked me what my vision was. I told him. We dissected my plan and he gave me some incredible feedback, including the thought for one item: “Why don’t you just do that now? What are you waiting for?” which was so obvious once he mentioned it, I had to slap myself in the face. He helped me with some minor tweaks in my messaging which could have big impact, and we discussed my billing. Always the billing. Whatever you are charging, it is likely not enough.

All in all, it was a very well-spent hour. The last thing he said: “Go back and write this stuff down.”

Writing it down makes it more real. You start telling people. When you tell people, opportunities begin to reveal themselves. You take steps to get closer because you know the end game. You refer back to it. You change it along the way.

Sure, I can write a book and tell you to write $5 million on the deposit slip. When three million people read the book and do it, one of the readers is bound to hit that benchmark, right? But he or she did something to make it happen; they didn’t edit the slip and go sit on the couch awaiting that check.

So yes. Write it down. But don’t write it down and wait for delivery via the Universe. Write it down because if you don’t, unlike the server at the top of this post, when you forget what you want, you can’t go back and verify the details.