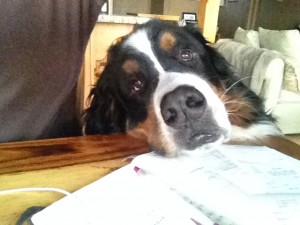 If you follow me on Facebook or know me, you know I lost my baby Jackson this week. As much as I hate to be predictable, I have to tell you a story or two.

We didn’t think he would have a long life. From 8 months old, Jackson was plagued with major joint issues and he underwent three surgeries in his short life. He lived just shy of 7, which exceeded our expectations.

Let me tell you, despite his setbacks and health problems, this Momma’s Boy was a happy dog, full of love with an expressive face, and a personality that filled the house til it feels empty now that he’s gone.

It is impossible to have a bad day when he’s around. I’d stop what I’m doing and he’d lay that big face of his on my lap. Anger and frustration dissipate around this spirit; this energy.

All Jackson wanted or needed was love and food. And maybe three minutes of running until he’d plop down on the ground, in the middle of the road or the trail. We definitely had to calculate his intentions  and energy level before we’d go out – we wouldn’t want to end up even a few blocks away from the house when he decided play time is done. 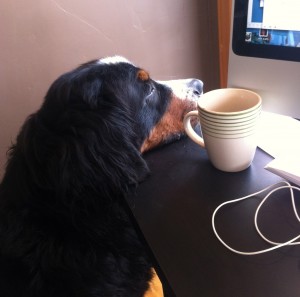 At home, you’d find him either sitting on my feet under my desk, leaning against me, or sitting here (to the left) watching me work. He will squeeze himself in tight places just to be able to be underfoot.

On the phone earlier last week, a prospective client happened to mention (not knowing my dog would die the next day.) about a technique for handling terminal illness diagnoses and seriously bad news like a job loss by asking yourself how you can turn the event into a gift.

Jackson didn’t leave me any genes to carry him forth. He didn’t bequeath me anything other than his collar and bowl.

The best gift I can derive from this loss is to carry his legacy by doing things as he would. I’m walking in my grandmother’s  shoes now I have to take Jackson’s lead, still hanging on the hook in the front hall, and preserve his memory and best qualities.

He was here a few short days ago. As time passes, and the pain begins to dull, I worry his memory will fade.

Be my own fan club

Losing a 110-pound appendage, is physically painful. My therapy dog and adoring fan club has left. He’d follow me like a luxurious rug that automatically moves from room to room so he could watch me.

He’d gaze at me adoringly and paw at me just for some attention, one touch PUH-LEASE! And when I put on my coat, he’d perk up and look longingly at my face waiting, praying to hear the words….. “Load up!” and then he’d sit in the backseat with his muzzle on the back of my seat. As close to me as possible.

Well, I tried but Pepper is not willing to fill the role of my adoring fan. We rescued our black lab from the “streets.” She’s tough and independent. As much as she loves me, she’d rather be chasing butterflies in the meadow than snuggling with me.

I have Patrick, but he’s been resistant to my training him to come running to the door at the end of the day, wagging his butt and jumping up and down with glee.

I’m going to have to fill this gap myself. I might check on Odesk and Elance, but a search for adoring fan has returned nothing. I’ll be own booster and fan club moving forward and I’ll name it after Jackson.

Every single morning, without fail, this dog would look at me in wild wonder when I said “let’s go for a walk.” If he could talk, he’d be saying, “STFU. Are you kidding me? For real? Don’t mess with me – that’s not nice.” For Jackson, dog walks were more sniffing expeditions than walks, with me continually yanking him to keep going. Many days, I was thinking about all the things I had to get done instead of being out here pulling him along from one sniff to the next. (What data are they gathering, by the way?)

Having such unbridled enthusiasm in the face of routine, keeps the heart young. People we met on the street thought he was still a puppy.

I’ve come to a place in my business where I have to delegate work. The stuff I dislike, or would rather not do, or perhaps isn’t the best use of my time in terms of building business – boom, out the door to a small awesome team I’ve put together. But I’ll still have to do work I don’t enjoy and routine items that I find to be a drag on my energy. I’m going to remember to enjoy the routine when I have to do it. Because some day, that routine item might go away, and I’m going to miss it like hell. Like my daily sniffing expeditions with Jackson.

Make it your mission to make people happy

When I posted the news about Jackson on Facebook, I received 135 comments plus phone calls, emails, text messages and many countless hugs. From friends who knew him well to friends who only knew him by stories on Facebook and Instagram, he had an impact. Whenever we were out and about total strangers would stop and ask if they could pet him and have their picture taken with him. A friend wrote:

His enthusiasm was contagious and it was impossible not to smile when he came charging up excited and wagging.  Of course, there was always that moment of panic when you hoped he would stop in time so as to not bowl you over.  He always did and he always made me feel special.

I’ve been “receiving” a lot this week. Thank the lordy for my husband and my good friends and family who have come to my mental rescue. I’ve eaten it up from the poems they have sent to sitting and having coffee with a friend and just crying.

It made me realize I can really suck as a friend and a colleague. Life easily can be too busy for me to deal with your challenges. If these people hadn’t taken time out for me, I don’t know where I’d be.

If this guy can have that affect on the world, why can’t I? 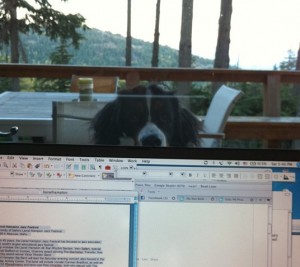