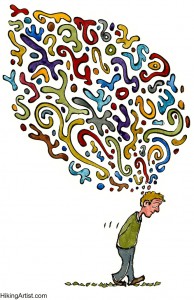 It might not be terribly smart of me to confess it’s August and I’ve had a hard time getting my head into work. (Some of you are my clients, after all, and perhaps that’s not very comforting to hear.)  I spent much of Wednesday in airports and airplanes; something I’ve always enjoyed because I get a lot of work done.

Instead, I spent the day reading Gone Girl. What’s worse, I barely enjoyed it because I felt so guilty the whole time.

Which is when I read this article in New York Times about the brain and its two primary functions – 1) The task-positive network which focuses actively on the task at hand, and 2) the task-negative network which allows you to daydream. At any given time, one of these networks is active but never both at the same time. (Thank you to Martin Waxman for sharing the article.)

About the task negative state direct from the article:

This brain state, marked by the flow of connections among disparate ideas and thoughts, is responsible for our moments of greatest creativity and insight, when we’re able to solve problems that previously seemed unsolvable. You might be going for a walk or grocery shopping or doing something that doesn’t require sustained attention and suddenly — boom — the answer to a problem that had been vexing you suddenly appears. This is the mind-wandering mode, making connections among things that we didn’t previously see as connected.

Also, I noticed there is no network for scanning Facebook while email notifications continually pop up while you struggle to finish that project that has been plaguing you for weeks.

This isn’t entirely new. We all know we need to take a break  – some of us actually act on it, others do not. We all know we do our best work when we’re in the shower or walking in the woods.

Switching back and forth

The insula is the part of the brain that switches you back and forth between the two networks. If you switch back and forth too frequently, you become tired, which might explain why I might be exhausted at the end of a day of sitting in front of my computer. The solution is to plan which part of the day you’ll do which and to try and stick with it. It would seem the insula doesn’t want to work that hard and switching requires a great deal of energy.

Our brains simply don’t have the capacity to be do one or the other full-time. If we don’t allow the task-negative time, we don’t get that opportunity to solve problems, correlate data points, and come to more creative solutions. Even if you’re the Leader of The Free World.

Training your brain during task-negative

But there’s one thing they don’t really mention in the study that I’d like to add. It sounds passive, to go in the woods and have all the world’s problems become resolved with each step you take as you watch your dog bounce ahead chasing butterflies and eating huckleberries from the bush. It doesn’t work that way.

I start every morning with a dog walk or a trail run depending on the day. During that time, I decide what it is I want to think about and what it is I want to “solve.” Just this morning, I was able to work through a section of my upcoming speech at SearchLove San Diego.

If I didn’t train myself to daydream, I might catch myself wasting mental energy on something stupid like, “I should really call out that person for Vaguebooking yesterday.” Or, “Someone was wrong on the Internet and it is my duty to deal with this.” Or, “Why is the person in front of me driving like a jackass?”

Because I want to give myself this time, it’s why I might drive in silence rather than listen to the latest podcast, or catch up on phone calls.

We have to let ourselves off the hook every now and then and say it’s OK to lose yourself in a good book in the middle of a work week. It’s OK to take that nap or go for that run. Our brains don’t turn off and we’re getting that good work done during that time whether we realize it or not.

Listen to yourself some time. You have a lot to think about. Now, if they would just come up with an app to convert all that thought into a to-do list…