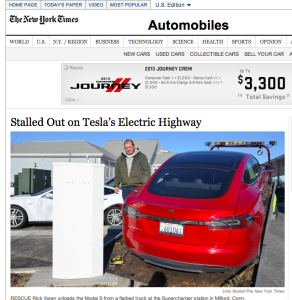 You may have read about the Tesla tussle with the New York Times earlier this year. (I hadn’t until recently – I just came out from under my rock.) Reporter John Broder wrote a scathing review about the electric Model S. He described a nightmare of a road trip with the car stalling in the cold Northeast temps complete with a large photo of the car being towed.

Tesla CEO Elon Musk rebutted on their own corporate blog. Perhaps John Broder was unaware of the technology built within the vehicle, but Musk pulled the road trip data and responded point by point to Broder’s review essentially proving that the reporter’s review was inaccurate and unethical, and that he had set out to sabotage the company from the beginning.

At first, I though this makes a great case study for the importance of building a community. A loyal audience and a loyal community allows you to get your story out with relying on the media as Musk did on his own corporate blog. It’s one of those wonderful side benefits to your online efforts and community building. But there is a lot more to it than that.

We aren’t all Elon Musk. We can’t get into a vocal and highly visible duel with the New York Times. I dug into the details further and thought about how I’d advise my client in the same situation.

The best crisis communications starts long before any crisis or issue arises. If you don’t spend time building relationships when things are going well, you’re sort of left out there alone to hang and dry when things go bad. There is no such thing as an add water now for your instant community.

Your community will come to your rescue when needed. You can see this in the comments in Musk’s blog post. The majority pledge their undying love to him, even if they don’t always agree with his approach.

Ask yourself the following questions when deciding how to respond to a PR crisis.

1. How do we want the response to change perception?

I don’t see any value ever in burning bridges, especially with a reporter from The New York Times. Further, you don’t want to come across as angry and defensive. Musk’s point by point rebuttal does all those things. Decidedly, having that data did well to prove his point, so he successfully planted doubts about the intent of the reporter.

You won’t always have facts on your side. Even if you do, a softer, less accusatory dialogue might be more in order. We want to win everyone over.

Which brings us to the silent audience: All those people reading the reviews and forming perceptions in the quiet of their homes.

2. How can we get the public to sympathize with our brand?

Elon Musk’s response created a second wave of publicity…and not in a good way.

Often we focus too much energy on winning over the actual detractor and while it is very possible to turn them around into ambassadors, sometimes you have to resign yourself to the fact it’s not going to happen.

In that situation, you should focus your response less on the actual detractor and more on having your response out there for the public to see. Elon’s response only served to anger his subject further, who wrote a second piece in the New York Times. Please, stop the bleeding.

Now, everyone is writing about the controversy and the back and forth, shining a light on the issue even further.

If you hadn’t seen that scathing review the first time it ran, it’s more than likely you caught it after the second.

Don’t respond in anger, but DO respond. Show that silent audience – the hundreds if not thousands who stop by and read that review, comment or whatever it is out there on the internet forever – that you are paying attention and you are dealing with the matter. You might be sorry, you might be fixing the problem, there are a variety of things you might be doing; and they should know. Lashing out only serves to fan the flames.

3. Are we prepared for potential backlash?

Let’s step back in time and talk about preventive maintenance. Before you begin your campaign, look at the various ways it might turn against you and plan accordingly. If you are going to have a Tweetchat, remember, someone can hijack your hashtag and trash talk you. Be prepared. Do the proper research on reporters before you invite them to review your product or service.

If Tesla had done their due diligence, they might have noticed Broder isn’t a fan of electric cars to begin with.

It’s difficult not to take criticism personally – even more so when it’s your own company and said criticism is costing you an estimated $100 million. Every situation is unique. Keeping your loyal audience in mind (the one you’ve been building and nurturing long for a long time) and your ultimate goal – how you want to influence perception on the matter – will hopefully keep you resilient in times of crisis.

This is a modified version of a post I wrote for Vocus.