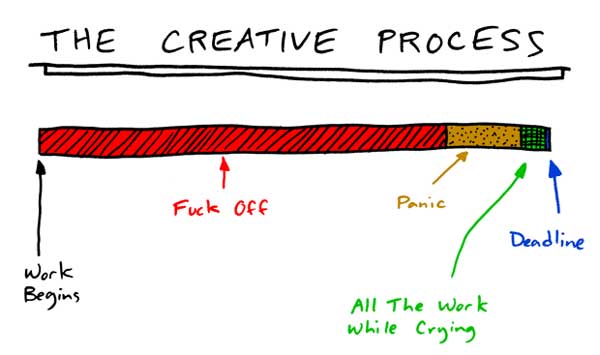 It takes me a LOT of hours to put together a new talk, probably more than it should, and there is a part of the process, the part between the shitty first draft* (SFD) and having something worth sharing with the world that is so painful and mentally debilitating, it might be taking a few months off my life every time I go through it.

Last night, I realized the chaos is part of the process. That’s easy to realize after the fact; but impossible to know when you are in the “this-sucks-and-will-never-be-good” phase. Which of course descends “I suck” accompanied by hair-pulling, neck-wringing, some tears maybe, and a little panic.

These are clearly not good emotions to experience when presenting to a room full of people who have paid money, and allocated precious time to listen to you. Also given this range of very unproductive emotions, I try to get my talk “done” a few weeks in advance so I can refine and practice it  – any thoughts of  lack of confidence should be far distanced from the time I’m standing on the stage.

Two nights ago I proudly rehearsed the opening story of my talk on reputation management to Patrick over dinner, sitting on our deck looking out at the Selkirks. It was about Monica Lewinsky’s response to her own personal reputation issue – the story I shared with you last week.  It fed right into my point that reputation management seeks to maximize the positive conversation and minimize the negative, and our response to issue shapes the perception, not the issue itself.

In my mind I had this nailed which is why I was annoyed when he stopped me short, his mouth twisted in that way that drives me insane, looking up kind of thoughtfully, but more like he is trying to understand what the eff I’m saying/doing.

New range of emotions: grab him and strangle him, slap that expression off his face, listen to his advice but don’t follow because he doesn’t know this world and hasn’t heard the whole talk.

I spent the next 24 hours digging deep trying to think of a story in my life that would illustrate my point as well as Monica’s did. (I mean, thank God I don’t have one!) I worked, I went for my Tuesday night mountain bike ride, all the while obsessed on how to solve this. I cut my ride short, because I needed to go home and tell Patrick about a new idea I had. As I launched into it, his mouth twisted again! and he looked up in the air again!

We began recalling chapters of my life. That’s when he said it: “What about when you were working in Aspen and were suspended without pay? and you almost didn’t get that job in Seattle because of it?” and just like that, 24 hours of stupid torment ended with a connection. And I had my opening story. And I got a much better night’s sleep and that “I got this” feeling again.

What Patrick did not know is that in her book Resonate, Nancy Duarte says:

Most great presentations use personal stories. As you create the content, there will be places where you want the audience to feel a specific emotion. Recalling a time when you had that very same emotion connects the audience to you in a credible and sincere way. Creating a personal catalog of stories associated with various emotions is a useful resource. (italics mine)

I try to find process in everything. It comforts me. I don’t think we can apply process to transforming the shitty first draft other than to recognize we are in that part of the creative process and acceptance is the first step. Give yourself time to work through it. Find someone who makes you better and isn’t afraid to give you the hard news (and knows self-defense, just to be safe), and even though anxiety might prevail, have trust and faith. Somehow it will work out. I have no idea how, though, so don’t ask me!